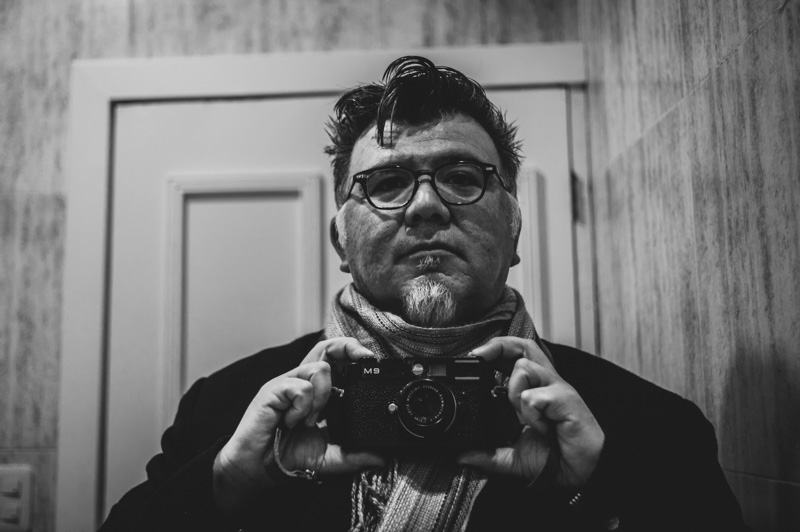 “[photography] is a matter of turning loneliness into thoughts.” —Shomei Tomatsu

When I first began to take pictures, it was a way of documenting my life around me. Later, I justified my taking of photos as a way of keeping an image scrapbook, a lookbook of sorts, for possible paintings. After that, I looked at my snaps as a scrapbook for potential story ideas.

I’m often asked about what camera I use for my snapshots. It depends: I have a bunch of cameras in my collection. Some I have for historical curiosity —a couple of Kodak folding cameras from the 1930’s and 40’s, a couple of Polaroid Land Cameras— some I inherited from my sister —Pentax, Leica R9— others I haven’t used in years —Epson RD-1— or only pull out rarely —Lomo LC-A, Leica M7.  Here in Turkey, my primary cameras, though, are my iPhone 7, my Leica M9, a Leica T (my backup camera body to my M), and a Leica D-Lux 6 (my small, compact, full auto camera ). There is a common element to my cameras: aside from my iPhone, for the last decade I’ve primarily shot Leica, either with Leica bodies or my Leica M lenses on compatible bodies.

Much has been written about photographers and their Leicas. Some of the greats who have used Leica include Henri Cartier-Bresson, Robert Frank, and Gary Winogrand. It would probably be a cliché to write that they are some of my favorite photographers —along with Manuel Alvarez Bravo, Juan Rulfo, Graciela Iturbide, and Shomei Tomatsu, whose preferred photo gear I’m unfamiliar with— and that I prefer street photography and candid snaps (fairly obvious if you go through my photo galleries).

However, I don’t use Leica because I believe that I’m anywhere as good as any of these photographers, in fact I prefer to call myself a chronicler of snapshots. What I like about Leica, especially the rangefinders, is their size —compact— and their heft. They feel weighty, though they are not. They are unobtrusive, small, and once you get the hang of focusing through the rangefinder (or using zone focusing), they are fast.  The lenses are marvelous, and the image quality is amazing. I’ve taken snapshots with Canon digicams in the past, and the quality I get out of my Leica lenses consistently blows them away. But I’m also not all that concerned with sharpness —I’m definitely not a pixelpeeper— and that’s why I’m happy using a toy camera, or not against throwing a funky lens on my Leica. For me, it’s about the feeling, the moment, the story that I can chronicle. And while this may imply that I should be happy using any camera; I’ve shot with many different systems and I always return to Leica. Their cameras feel, somehow, comfortable to me.

I’ve shot with a number of cameras throughout the years, from toy cameras to SLRs. My sister, Ann (RIP), was also into photography, and our mom got her a nice Ricoh 35mm SLR. From the Ricoh she moved on to a  Pentax that she used for years, before ending up with a Leica R9. Before I moved to Mexico City in the late 1980’s, mom also gave me a camera, a cheap, small, plastic 35mm toy camera.  It might have been a knock off of a Diana camera.  The pics were never all that sharp. I loved it. I painted the body with acrylic paint and went out into the streets of Mexico City.

Following my year in Mexico City, I invested in an SLR, Canon EOS system. I used EOS cameras for years, though I always pined for my little toy camera —it didn’t last long after I returned from Mexico. I got into digital photography early; my first digicam was an Apple QuickTake 200 that I bought in 1996 . It took terrible photos —sadly, none of which survive to this day— but I loved the size.

My first “real” digicam was a Leica, a Digilux 1 that I purchased before moving to Salamanca, Spain in January 2003. Compared to the QuickTake, the photos were amazing. Where the Quicktake had a resolution of about .3 megapixels, the Leica had 4 megapixels. Compared to my current digital camera, a Leica M9 with its 18 megapixel resolution, the Digilux 1 is sorely lacking. However, the Digilux was small and that became my camera of choice, and also the only camera that I took with me to Spain.

In March, 2003, on a quick pass through London, I stopped into a camera shop and bought my first film Leica, a gently used CL from 1973. It came with a Leica Summicron-C 40mm lens. It was lovely. It was pocketable, and the photos it took were amazing. But it also had a learning curve that I was unprepared for: I had never used a fully manual camera, nor had I ever used a rangefinder. My toy camera from the 80’s had an automatic mode, in that it was basically a pinhole camera with a body attached. That is, no autofocus, no manual aperture or shutter speed control; it was just point, shoot, and hope something was in focus. I’ve never taken a photography class or workshop, and I became largely self-taught with the CL,  where I had to determine shutter speed, aperture settings, and focus. The light meter worked, so that was helpful, but it took me a while to figure it out (there was no manual with the camera). In the few months that I had it, I was able to get up to speed on using a fully manual camera.

If it wasn’t for the fact that I was staring at cameras in a camera shop in Barcelona —camera shops, like bookstores, and record stores always call to me— I might still have the CL. However, as I was getting more and more into rangefinders, my dream camera was an M. That afternoon in Barcelona, as I was looking at used cameras, I found a very, very, very beat up M6 for an extremely reasonable price. While the leather covering was still in decent shape, the body was a mess. The top and bottom plates were held together by scratches and brassing. It was an ugly camera. I decided then and there to trade in my pretty good condition CL body for that beat up M. Each scratch, each part where the paint was worn away, told a story, and I wanted to add my story to that camera.  And, just as with the CL, it took me a bit to figure out how to work it. Later, I upgraded to a new M7 (the only M I’ve ever bought new, because, let’s face it, M’s are really spendy).

I went through a number of other Leica digital bodies —at one point I had an EOS digital body, but sold it after a year because I prefer to shoot with smaller cameras— while also occasionally shooting film with my M7. I loved the look and the design, and I hoped that eventually there would be a digital M where I could use my Leica glass. That first digital rangefinder came not from Leica, however, but from Epson, the RD-1. In Barcelona in 2006, at the camera shop where I had traded in my CL, I found a used RD-1. I immediately traded in some gear that I had with me, and went out into the streets with the Epson and the Summicron-C.  It was a bit larger than my M7, but still smaller than other SLRs, and the best was that it came with an M mount. For the next four years, that camera went with me on trips across Spain, Mexico, and Turkey, until the summer of 2010, when I purchased a Panasonic GF-1 that had a higher megapixel count, and could be used with my Leica lenses with an adapter.

In 2013, I found a great deal on a used Leica M9, the first full frame digital rangefinder. I sold the Panasonic, and, a decade after buying my first Leica rangefinder —the Leica CL— I had a Leica digital rangefinder. The lens I use on it: my Summicron-C 40mm from my old CL. The lens dates from about 1973, and though I have a number of other lenses, including a 50 mm Voigtlander f1.1, I pretty much always use the Summicron-C. It’s compact, has great imaging qualities, and the snapshots I’ve taken with it are some of my favorite.

My M9 is not my most used camera, as I’m a firm believer in that old saying, “the best camera is the one that you have with you.” In that case, my iPhone is always with me.  However, it’s my M9 that I reach for when I travel. I also have an arsenal of cameras, though I don’t consider myself a collector. Each  have stories attached to them: hiking around Machu Picchu with my RD-1; traveling by boat up the Nangaritza River in the Ecuadorian Amazon with my Leica D-Lux 6; wandering around the crowded city center of Madrid with my Lomo LC-A; exploring Cappadocia with my GF-1; strolling around Köln with my M9; snapping pics in San Francisco’s Chinatown with my M7; stomping around Istanbul in a snowstorm with my iPhone 7. Though I take a lot of photos, I still don’t consider myself a photographer. Rather, I’m more of a snapshot person, a documentarian, a chronicler of moments.

I recently read a review of the CL on the Phoblographer, and it brought back memories of my short time with my CL.  Sometimes I think about hunting one down, to return a CL to my collection, to use it a while and remember those days when I was living in Salamanca, Spain, and recording my life digitally and in film. Turning —to quote Tomatsu— my inner “loneliness into thoughts” expressed in images.

“Sometimes a photographer is a passenger, sometimes a person who stays in one place. What he watches changes constantly, but his watching never changes. He doesn’t examine like a doctor, defend like a lawyer, analyze like a scholar, support like a priest, make people laugh like a comedian, or intoxicate like a singer. He only watches. This is enough. No, this is all I can do. All a photographer can do is watch. Therefore, a photographer has to watch all the time. He must face the object and make his entire body an eye. A photographer is someone who wagers everything on seeing.” – Shomei Tomatsu


Error: API requests are being delayed. New posts will not be retrieved.

Error: API requests are being delayed for this account. New posts will not be retrieved.


Error: API requests are being delayed. New posts will not be retrieved.

Error: API requests are being delayed for this account. New posts will not be retrieved.